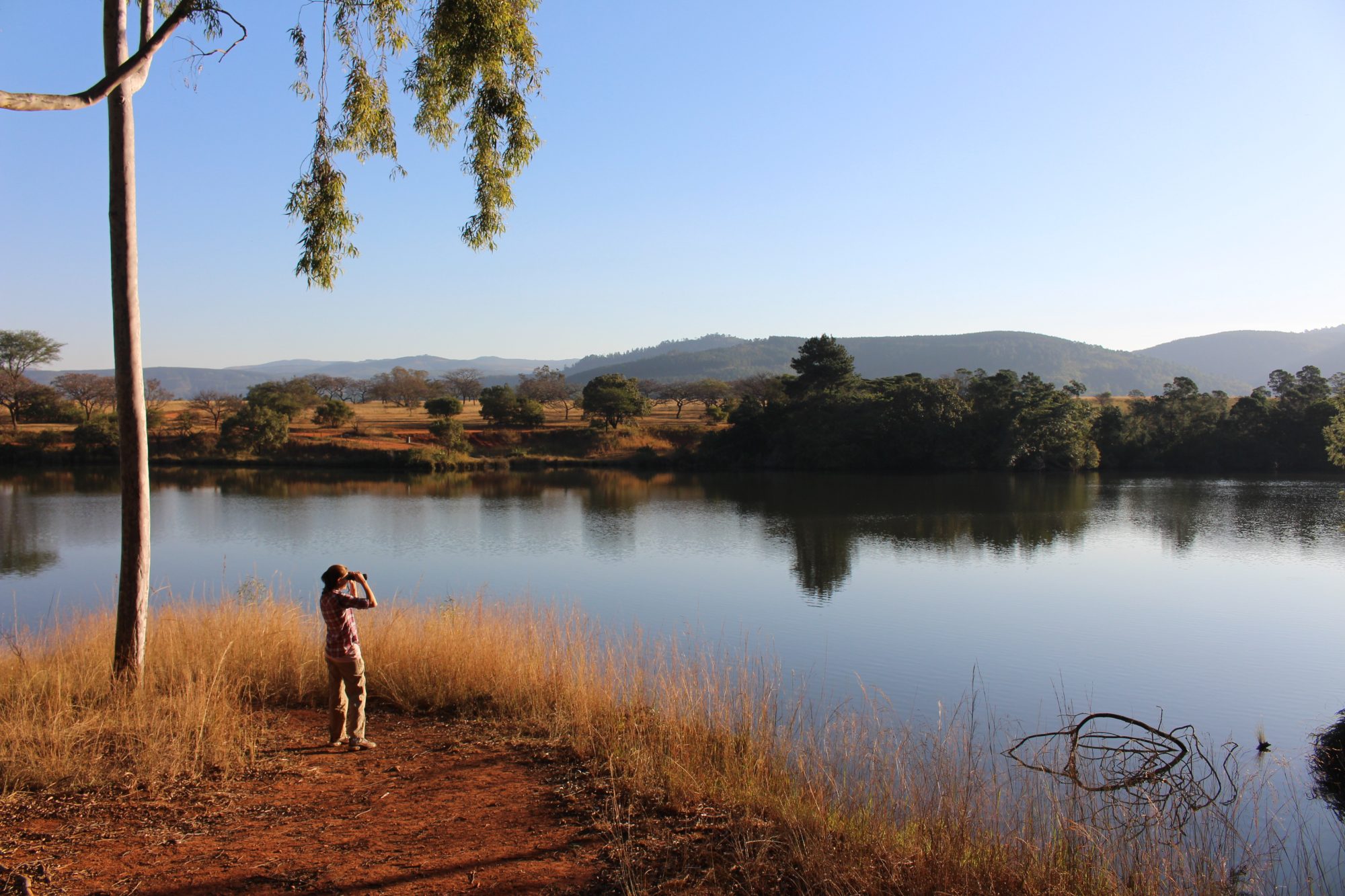 Crossing the big blue Atlantic ocean over night, I found myself early that morning setting foot on yet another continent, and one I’d dreamt about visiting for years… Africa. A captivating land known for its amazing wildlife, grandiose natural beauty, rich and diverse history, unique culture, traditional village life and unfortunately, patches of tremendous poverty. My first stop would be the last remaining monarchy in Africa, the diminutive kingdom of Swaziland, and it would prove to be one of my favorite and most memorable stops on my journey so far. Arriving at the border crossing in my rental car straight away from the Joburg airport, I found myself amid a large mob of people with passports held over head, pushing and shoving trying to get the attention of the lone immigration official on duty. After 30 minutes or so I had made my way past all the more timid foreign travelers (needless to say, my timidity had gone out the window 12 countries ago) and shoved myself to the front of the local crowd to finally get my stamps. Then came the battle to get out! Getting back to my sweet compact rental car with its un-safari-ready tiny wheels, a paltry 6 inch clearance, plastic bumpers and most importantly, a maxed out insurance plan, “The Adventuremobile” as I affectionately called her whisked me away from the chaos and into the great unknown. I headed the hour or so to the middle of the small country to make base in the beautiful Malkerns Valley at a converted mansion called the Sundowner Hostel. Getting acclimated to Swazi culture, my first few days were spent exploring the area and visiting the many local craft markets in the area. On the third day I visited a traditional Swazi village to see a customary drum and dance show and learn about local village life.

The next day I headed an hour across the country to the gorgeous Hlane National Park to see what I could find. It was safari time. Hiring a jeep and a guide from the entrance, I set off through the varied terrain in search of the infamous African “Big Five”. Lions, Buffalo, Elephants, Leopards and Rhinoceros. We drove for some time scouring the countryside with no luck before arriving at a watering hole deep in the woods. Directly across the water from us stood a massive full grown wild male elephant towering over all the plants and animals around him. Including us. We sat there for some time in awe watching as the beautiful beast drank from the small pond before we headed off in search of other wildlife. We wouldn’t have to go far. As we headed down a dirt road through a grassy plains like section, we came around a bend and spotted a large male lion lying in the grass near the road. Mind… officially… blown! Our driver took us within just a few feet of the lion which in an open air jeep seemed a little crazy since we were so close he could have easily jumped in the jeep with us before we even had time to turn and run. We sat there for some time watching this king of the jungle as his large golden mane billowed in the wind and every yawn revealed a massive mouth full of teeth designed specifically for killing. We could hear him growling at us as we drove past him which at our proximity honestly made our stomaches drop a bit. What an experience. Two down, three to go. As we made our way deeper into the park we came across a field full of grazing Kudu (an antelope like animal), beautiful Impala and several large imposing Buffalo. Three of the “Big Five” down and the day was only just beginning! After stopping to watch another large male lion and many more elephants deep in the thicket (talk about lucky) we stumbled upon several majestic orange and brown giraffes hanging out in a small clearing. Giraffes being one of my favorite animals, I snuck out of the jeep and was able to walk up close enough to them to draw their attention my way. The smile on my face could have been visible from space. As we continued on past herds of roaming warthogs, monkey covered trees and various other amazing fauna (This was one of those once in a lifetime kinda days), we entered a clearing filled with what appeared to be huge grey boulders bellow a tree. That is until one of the boulders stood up to look at us and revealed itself to be a giant White Rhino! We pulled up close to the group of Rhinos who all raised their heads in curiosity. Somehow we convinced our guide to let us hop out of the jeep (a big no no) and pose for pictures just a few meters in front of the massive creatures. As soon as I took two steps in front of the jeep though, the two ton Rhinos all stood up at once to face us and our driver quickly hurried me back into the jeep and hit the gas. Rhinos can run 30mph and inflict a lot of damage fast so we left our Rhino friends behind and headed out in search of the 5th of the Big Five…the illusive Leopard. A nocturnal animal that blends in so well to their surroundings they are almost impossible to spot during the day time. Our search unfortunately proved futile and I left Hlane that day having seen an incredible four of the Big Five (and so much more) and having had possibly the greatest wildlife experience of my life.

Um, Laura, I think you’d better get back in the jeep!

The next day I sought to continue feeding my newly discovered addiction to African wildlife and drove to the Mlilwane Wildlife Santuary. Since I was allowed to do it, I drove my own little car in and went on a dirt road safari in the Adventuremobile. Since it was so low to the ground I had to stop regularly and climb onto the roof with my binoculars to see over the roadside flora. Man that car was completely covered with muddy footprints by the end of the day! But the perseverance finally paid off.. Zebras! In a field on a hill nearby. Since they were nowhere near the road I grabbed the camera and set off on foot into the bush to find them. Crossing a stream and taking several wrong turns, I eventually found the small heard of ten or so grazing Zebras and walked right in amongst them. It was unreal, they are truly stunning animals to behold. The vivid black and white stripe patterns were so striking against the green and brown backdrop. I walked with them silently for 30-40 minutes, no other humans in sight, in a surreal almost meditative state. It was as if I was communing with nature somehow and it was quite a sensation. After a while I eventually made my way back to the car. I wouldn’t find any leopards in Mlilwane unfortunately but the memory of walking with that heard of Zebras that day will last a lifetime. As will my entire trip to Swaziland. A few more days enjoying the local culture, amazing people, breathtaking landscapes and unique cuisine and I headed South across the border into South Africa. To begin a whole new adventure.