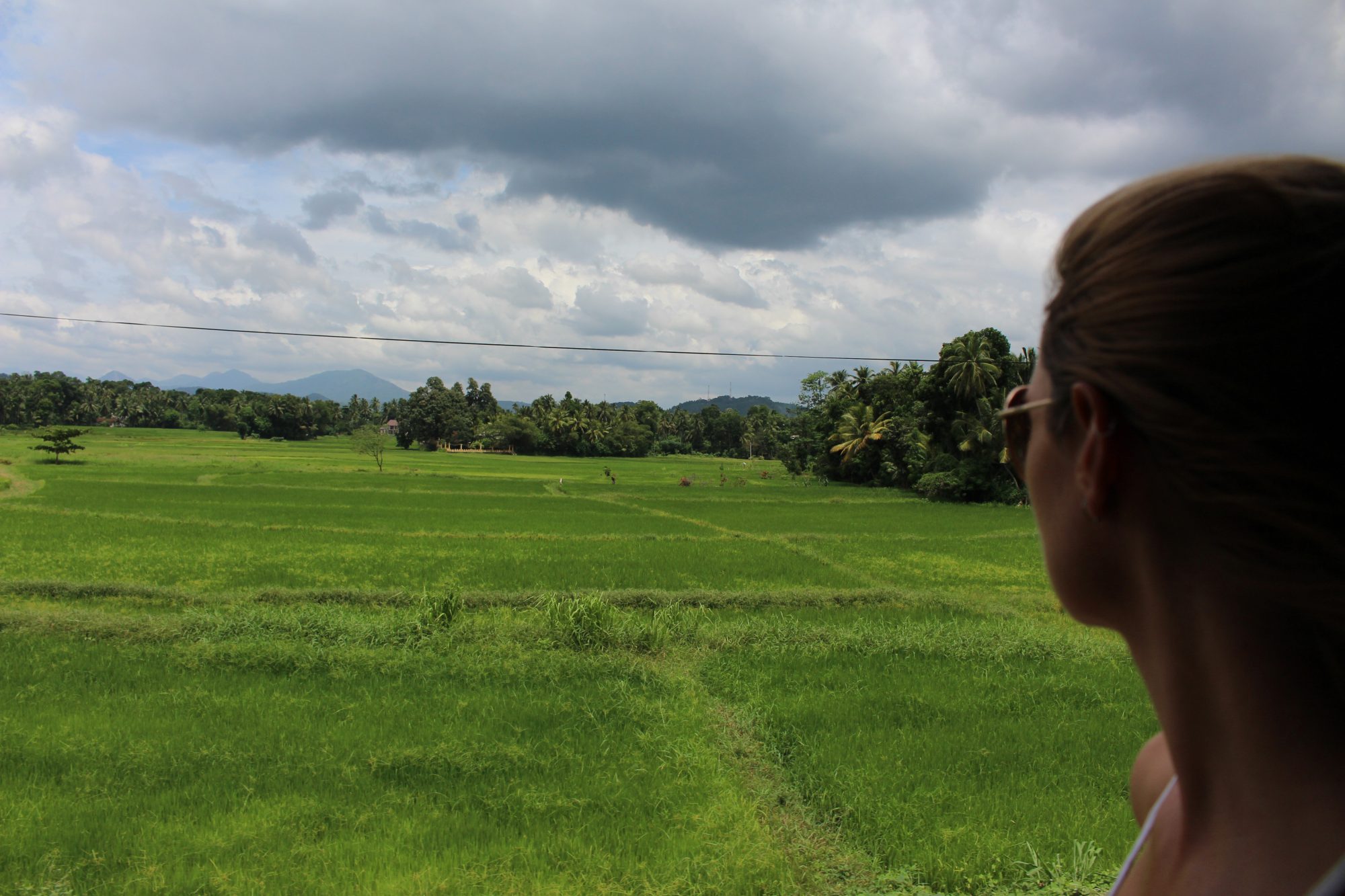 We arrived in the amazing country of Sri Lanka after an enjoyable but long overnight flight from South Africa. An island off the southern tip of India, Sri Lanka is an enchanting country with gorgeous white sand coastlines and an emerald green mountainous interior. Known for being one of the worlds top tea growing countries, the primarily Buddhist country is emerging from decades of civil war and travelers are just now able to truly discover its incredible richness of culture and beauty. We landed in the capital city of Colombo excited to take our first steps in Asia on this journey but sad to have said goodbye to Africa. Our first several days were spent getting acclimated to Sri Lanka and the new time zone we were now in. While adjusting we visited Colombos various sights including the beautiful Gangaramaya Temple and discovered my new favorite food… Chicken Kothu Roti. A delicious combination of chicken, chopped flatbread, vegetables and herbs in a dry curry, Kothu would be my default cheap, hearty and healthy go to throughout Sri Lanka. So good.

After a few days wandering around the streets of Colombo we boarded our first train since Panama and headed deep into the countries mountainous interior towards the town of Kandy. The train ride was incredible, winding through the mountains, past waterfalls and monkey filled trees. Many of the local passengers hung outside the open doors and windows and we did the same. The mountain air blowing across our faces as the jungle whisked by, ducking back in just in time when a tunnel came. That train ride itself was an experience beyond words and a memory to last a lifetime.

Riding the rails to Kandy

Arriving in Kandy we spent the early evening at a traditional folk music and dance performance, enjoying the drums and the unique traditional plate spinning performance. The elaborate costumes alone were something to behold. Afterwards we made our way to our ultimate destination and our primary purpose for visiting this town. The grand Temple of the Sacred Tooth Relic. Home to the several thousand year old tooth of the Buddha himself, the incredible temple complex was alive with drumming monks, the smell of burning incense and hundreds of Buddhist worshippers carrying flowers and other offerings. With a gold-plated ceiling, marble columned hallways and literally thousands of burning candles, we wandered past dozens of beautiful paintings detailing the history of the Buddha and the journey of the sacred tooth to Sri Lanka. It was fascinating and magnificent beyond all expectations. But we were ready to see the tooth. Getting in line with the hundreds of locals we were led through corridors and around turns until we eventually came to the tooth shrine where the tooth was enclosed in a gold vessel. Again…fascinating. We spent another hour wandering the candle covered courtyards and shrines before leaving with a new perspective on the Buddhist religion and the devotion of its followers.

Temple of the Sacred Tooth Relic

Moving on from Kandy we took another spectacular train ride deep into the mountains to the heart of Ceylon tea country. The rails wound through verdant green tea plantations while rolling hills surrounded us as far as the eye could see. Our next stop: The charming mountain village of Ella. What was supposed to be a single days visit turned into many as we found ourselves bewitched by the beauty, tranquility and fresh mountain air in the heart of Sri Lankan tea country. One of the highlights was a visit to an actual functioning Ceylon tea factory deep in the hills. An engaging and educational experience and we left having learned so much about a complex process we’d never thought too much about.

Tea as far as the eye can see

And then it was beach time. It was July, and as such the Eastern side of the island was in peak season. We set off towards Arugam Bay, the surfing capital of Sri Lanka.

Arugam Bay is an odd little beach town. With scores of travelers including a huge number of Australian surfers, it feels like it could be a wild party town, except that with all of its permanent residents being Buddhist and Muslim there are no liquor stores in town and only one beach bar is open each night. Kinda perfect. We spent our many days in Arugam Bay swimming in the ocean, lounging on the beach, hanging out with our new Kiwi surfer friend Chris and dancing with other travelers and locals under the moonlight at night. For several days we’d heard about an upcoming full moon beach party at a beach down the coast and when the night finally arrived we hired a tuk tuk and set off away from town. Laura and I were in the back as Chris hung off the side of the open air vehicle, the three of us cruising through the Sri Lankan countryside under a beguiling moonlit night. About fifteen minutes outside of town we were drifting through the darkness when something appeared in the road in front of us. Our driver stopped, catching the large crocodile in our headlights. This country was a bit wilder than we thought. We slipped past it but just a few minutes later a much larger object appeared in the darkness in front of us. It was a massive wild elephant! It lumbered past us in the moonlight as we sat in silence watching the majestic beast. Very cool. We eventually made it to the beach only to find the party had actually been cancelled but the incredible journey to get there made it all worthwhile.

The surf is strong (obviously) in Arugam Bay so after a week or so we decided to depart and attempt to spend the last week of our time in Sri Lanka at a mellower beach. The southwestern beaches were supposedly the most idyllic in Sri Lanka but were theoretically being hit by the southern monsoon in July. We took a big risk hoping we’d somehow miss the rain and traversed the whole country in twenty hours to try to find the perfect beach. We hit the jackpot. For five days we nailed a window of sunny skies (literally the day before we got there it had rained all day) and thoroughly took advantage of it. We first spent a day in the beautiful old fort city of Galle, walking the ramparts and eating delicious food before heading to Unawatuna beach a little bit further south. Our last four days were spent in Unawatuna swimming every morning and afternoon, enjoying the perfect white sand and eating fantastic fresh grilled seafood by tiki torch-light on the beach every evening. A little piece of paradise it was.

On our last day, Laura and I had gone swimming out past the breaking waves and were floating on our backs in the blue water, peacefully taking in some sunshine. “Blissing out” as we like to call it. Three weeks had gone by since we had gone cage diving with great white sharks in South Africa and seen the true power and ferocity of the creatures. A large swell lifted us and I came out of my trance in time to look over and see a fin attached to a  large grey object below the surface about 10 meters from Laura who had drifted a bit further out to sea than me. “What’s that?!” I exclaimed as Laura rolled over and saw what I was pointing at. It appeared to be getting closer. “Oh My God!” Laura exclaimed and the two of us began swimming as hard as we could towards shore. The large swell that had woken me was now headed out to sea and was pulling us backwards towards whatever was in the water as we frantically paddled as hard as we could to fight it. A touch of panic was setting in. It was at this point that a large reptilian head emerged from the water just next to Laura. “A snake!” she yelled as I looked over in time to see the head go underwater beside her. The other grey finned creature still behind Laura and still getting closer. I swam back a bit, grabbed Lauras hand and pulled her away from the animals and in front of me and we swam harder than either of us can remember ever doing. We were finally able to catch a wave which took us close to shore. Our feet hit the sand and we ran hard through the water to finally reach the beach completely exhausted. We were trying desperately to catch our breath as some locals ran up and asked if we were okay. They had seen us freaking out in the water and swimming hard to shore but couldn’t see what had been behind us. They told us the giant head that had popped up next to us was actually a giant sea turtle and not a snake at all. We never did figure out what had been chasing us that day… but I like to think it was a great white shark that we out swam.

We hated having to leave Sri Lanka, it was one of our favorite places so far and in three weeks we’d barely scratched the surface. It immediately joined Africa, Colombia, Belize and Peru on our “we WILL go back there some day” list. With fantastic food, spectacular beaches, lush green mountains, rich culture, beautiful historic ruins, a great exchange rate against the dollar and incredibly friendly people… Sri Lanka is the total package. But it was time to head to India. A massive country only an hour plane ride away. And the beginning of our next adventure.