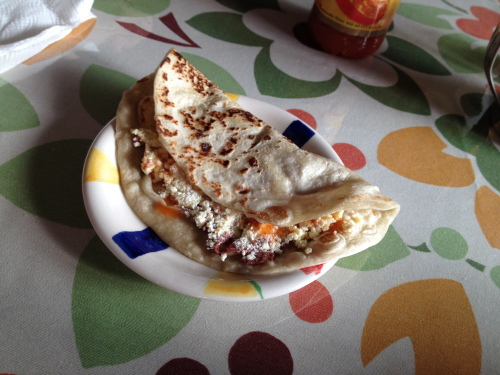 There are quite a few stories about the history of the Honduran baleada, one of the most popular street foods in the Central American country. The most interesting that I have heard goes as follows:

There was once a woman from La Cebia who sold delicious wrapped tortillas. One day, out of nowhere, she was assaulted and was killed by a bullet. The word for bullet in spanish is balas. The woman was so adored for her cooking that from then on when people went to a restaurant they would say, “we are going to the baleada” (baleada in spanish means literally, shot woman) instead of “we are going to a restaurant” in honor of her.

Today, a baleada is a homemade, fluffy, wheat flour tortilla that is thicker than traditional tortillas. It is most commonly filled with mashed red beans and cheese. A super baleada meanwhile typically adds scrambled eggs, sour cream and a choice of chicken or ham. Once filled, the tortilla is folded in half like a crescent moon and toasted lightly. I prefer mine without meat (of course) and topped with local Honduran hot sauce.

Baleadas are a super affordable way to get in some good local eats, especially if you are eating on the go! 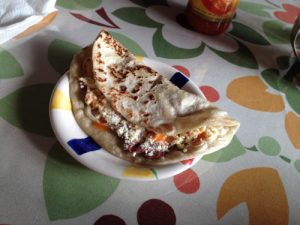