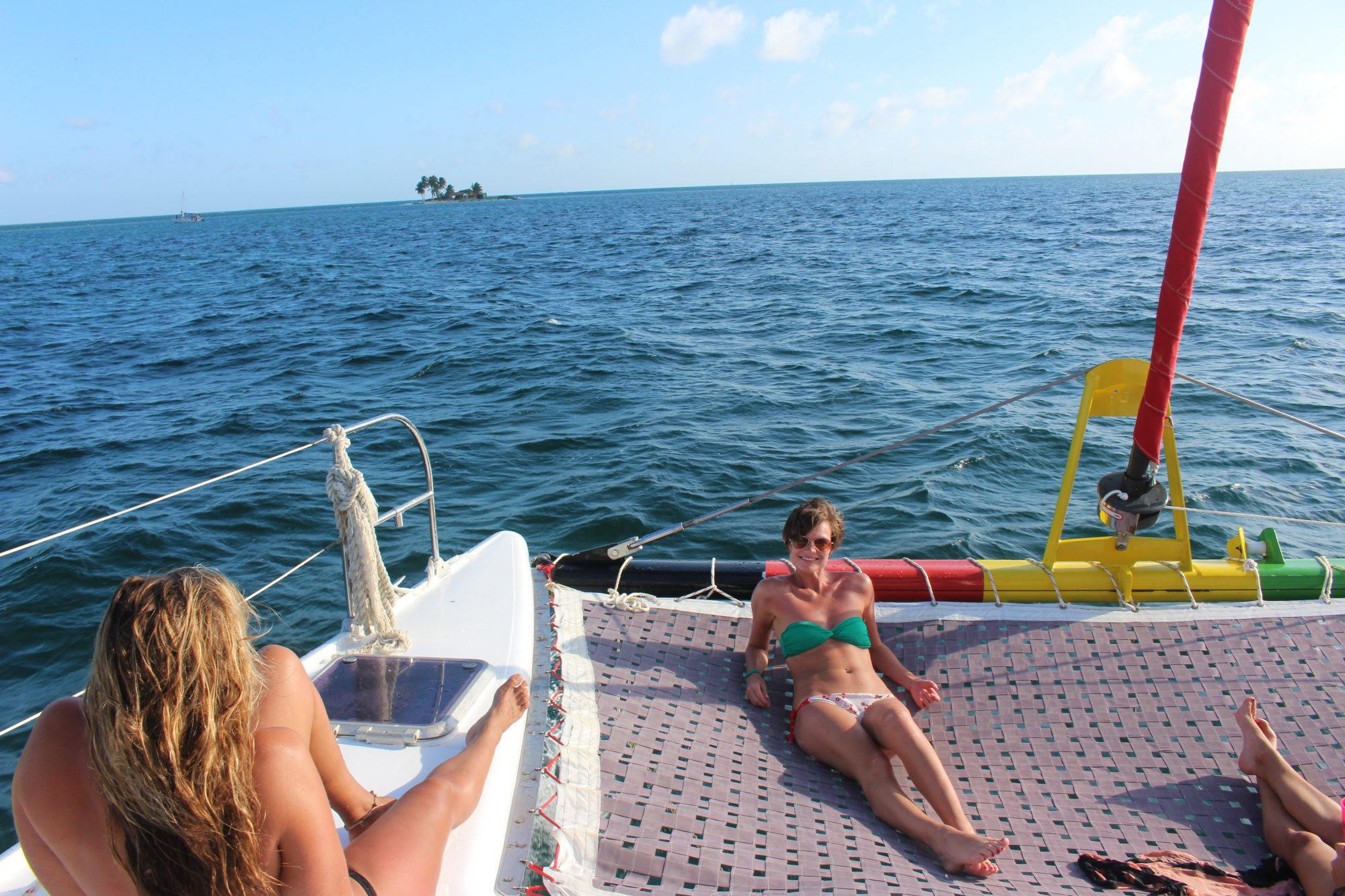 Making my way into gritty Belize City after a 5 hour bus ride and border crossing, the Caribbean sea finally revealed itself in all its blue glory. Hopping a ferry to Caye Caulker (“Caye” being the Belizean name for island) I found myself on a half mile wide, 2 mile long sliver of land ringed with white sand and palm trees. Considered the “backpacker” island of Belize, Caye Caulker is dotted with inexpensive guest houses and cabanas as well as “street” vendors grilling fresh fish, shrimp and lobster along the sandy streets. There are a few golf cart taxi’s on the car-free island but most people walk or ride bicycles everywhere. The tag line of the island is “Go Slow” which starts really making sense after a few lazy days eating lobster barefoot on the beach, listening to local Reggae and swimming in the sea at sunset. When a whole grilled 1.5lb lobster with coconut rice, vegetables, fruit AND shrimp skewers costs a mere $10 US, why eat anything else! I didn’t

One could really get lost there, many have. The people of Caye Caulker are a mixture of Mestizo, Garifuna and Creole but in recent years a large number of Chinese have moved to the island. The influx of Chinese who have purchased or opened a number of businesses began forcing lower prices on everything on the island. Unfortunately part of how they do this is by selling expired products on their shelves. I went to buy a carton of soy milk at a Chinese grocery and it had expired more than six months earlier. Seriously. You can not find a local Belizean with nice things to say about the Chinese on the island and you definitely get a sense of escalating tension between the groups. It was fascinating.

After a few days of chillaxing, island style. My friends and I decided to take a snorkeling trip on a sailboat out to the Hol Chan Marine Reserve on the nearby Belize Barrier Reef, the largest reef system in the western hemisphere. Stopping at Shark Ray Alley, our guide chummed the water with fish parts and we soon found the boat surrounded by giant Southern Sting Rays and Nurse Sharks. “Jump in!” shouted Captain Steve. Knowing that we hadn’t paid for the tour yet we assumed this had to be a safe thing to do and in we jumped. Into a swarm of sting rays and sharks we went! It was amazing, a little bit frightening but definitely an experience I’m glad we had and we made it out unscathed. After stopping to swim with a giant one eyed sea turtle (a bit of a local legend, “Don’t sneak up on him by his bad eye or he’ll get you good!” repeated Captain Steve), we made it to the reserve and swam across and through huge colorful coral beds teaming with Parrot fish, green Moray Eels and dozens of other colorful fish. Upon our arrival back at the land we decided to sign up for a 3 day sailing, snorkeling and camping island hopping adventure down the Belize coast the next day.

The next morning we loaded up our gear onto the sailboat for the ultimate “get away from it all” adventure. The beauty of the sea and the island hopping experience was amazing! And after landing on our destination island, the majestic Rendezvous Caye,…  something else happened…the sun set… and the stars came out… and I don’t know if you’ve ever been on a completely empty speck of an island, with no buildings, no lights, no other islands or land in view whatsoever… but when those stars come out in that type of complete blackness… we were all speechless. It was pretty much a religious experience. You felt almost as though you were floating in space in the blackness with the Milky Way streaked across the sky above you. I can’t even describe it. It was intense and humbling. One of the best experiences of the trip so far without a doubt.

The next day after a night camping we boarded the boat and spent the rest of the day island hopping and fishing for barracuda and grouper on our way to Tobacco Caye (population 50).  There are a few small rustic guesthouses on the island and we were able to get a cheap room so we could finally shower with fresh water and get all the salt water residue off our sun soaked skin. That night after grilling lobster, our grouper and the barracuda on the beach, some local island Garifuna drummers got the rhythm going on the beach and we all danced with the locals in the moonlight. We finally got too hot from dancing and jumped into the water to swim with the long tarpon fish under those stars.

Another day of sailing deposited us in the sleepy beach village of Placencia. With the narrowest Main St. in the world according to the Guinness Book of World Records.  The “Sidewalk” as it’s called is a palm tree lined footpath that carves its way through town running about 100′ away and parallel to the beach. We’ve done so much on this trip already, Placencia is the ultimate rest and recovery destination. Tomorrow morning we hop on a ferry towards the Honduran coast. It’s a long trek (two ferries, three busses) through Honduras ahead of us the next few days but it’s time to move on. Next stop… Utila Island and scuba school!